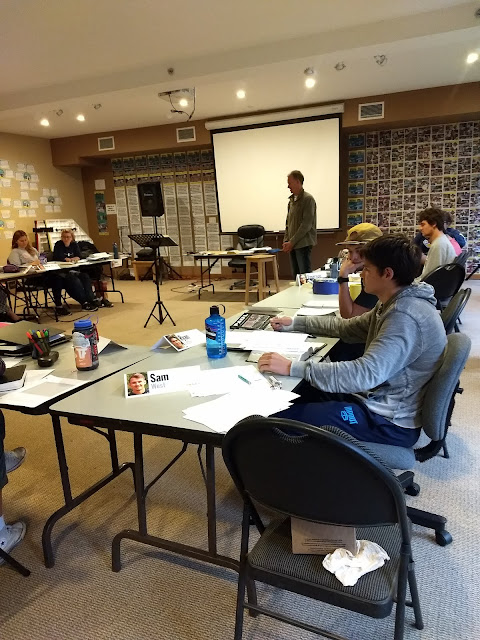 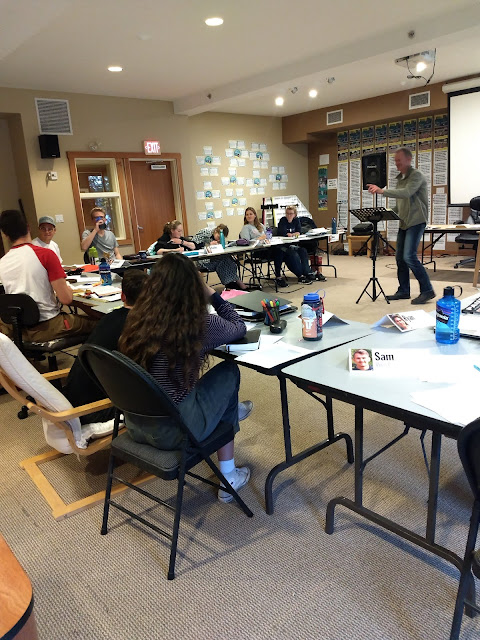 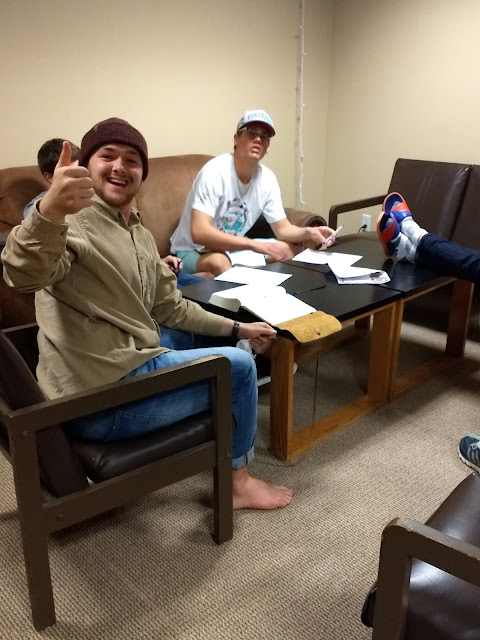 The students have been learning how to take what we learn from a classroom and let it impact their relationship with Jesus. You can be praying that this continues throughout the year, and that they will be able to look at their school work as more than something to do and instead something to impact their understanding of God. 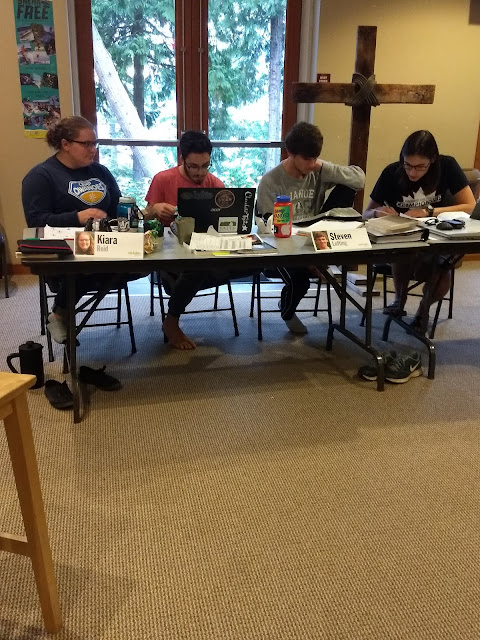 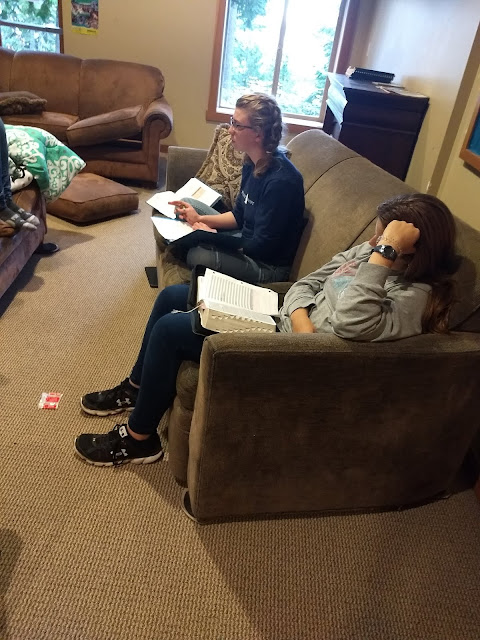 This week the students had the option to go to a corn maze and Dairy Queen with the staff! We had a great time running in the dark, playing tag, and getting super muddy. Then we went to Dairy Queen and some of the students potentially ate too much ice cream, but it was a good time. 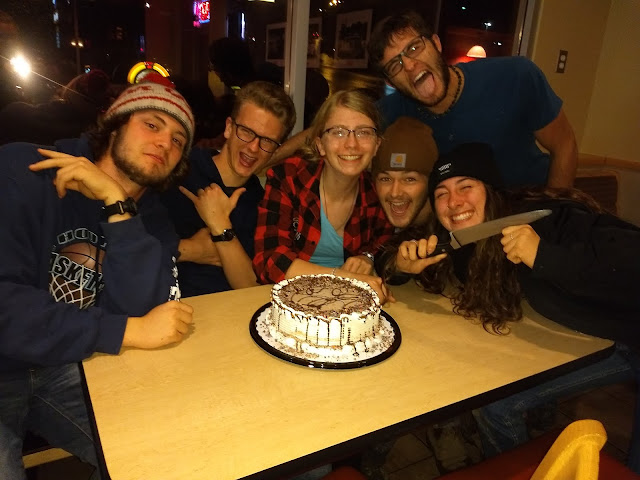 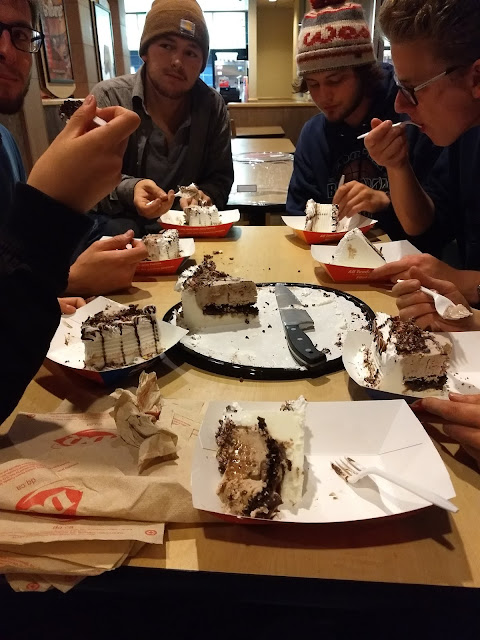 
We are heading caving this week! This will be a one day trip to go look at some caves as a group. We will be focusing on prayer and leadership as well. This will stretch the students to learn how to pray intentionally for an hour at a time. The students have signed up for different slots that they will pray in and we have set aside a room for them to use while they pray. We will also be focusing on leadership development so you can also be praying that they will seek personal reflection.
Posted by Female Intern at 2:46 PM No comments:

After coming off of a week of sailing the students started the first half of their Camp and Youth Ministry class with Sid Koop. Our students come from a variety of camp backgrounds and experiences. This class has helped them to articulate many things that they may have already experienced in working with youth, while also highlighting key strategies to use moving forward working with young people in our 21st century world. 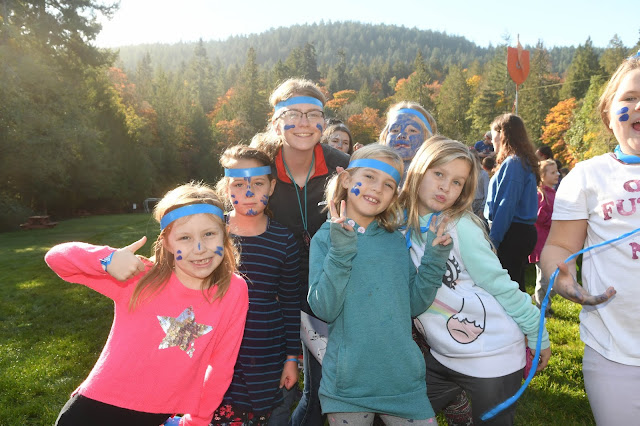 This is our only class in the Kaléo program that is separated into two separate blocks, one in each semester. This gives the students an opportunity to learn about working in a camp and youth context and as the program continues they are given the opportunity to work in a series of retreat weekends that Camp Qwanoes runs. Also putting their skills to the test in the youth groups that they serve in throughout the year. Then the second half of the class takes what they have learned through their experiences and they learn different aspects of organizing and running a youth event or camp retreat. 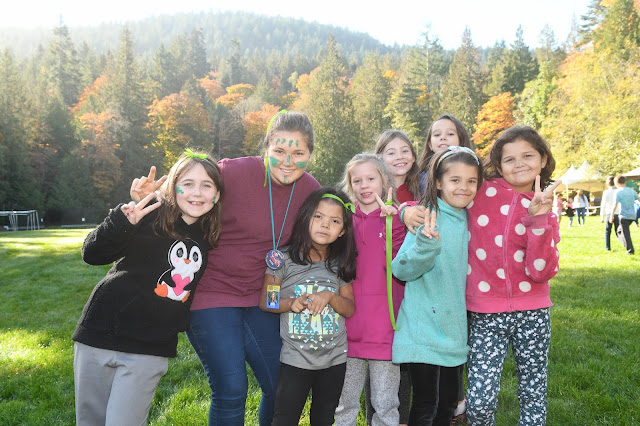 Many of the students served as; counselors, helpers in the kitchen, running activities, and everything else in between. 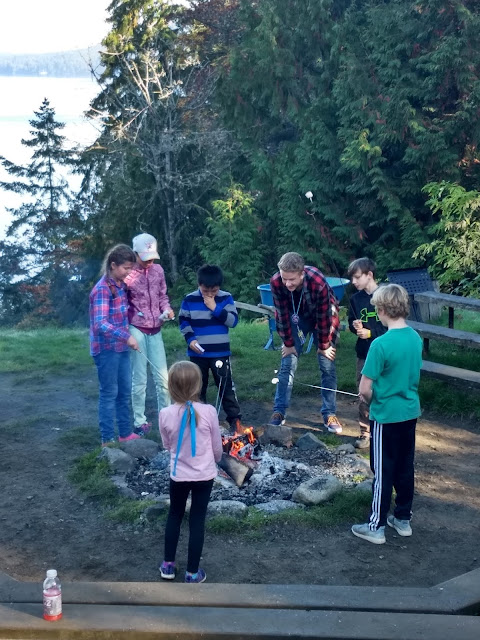 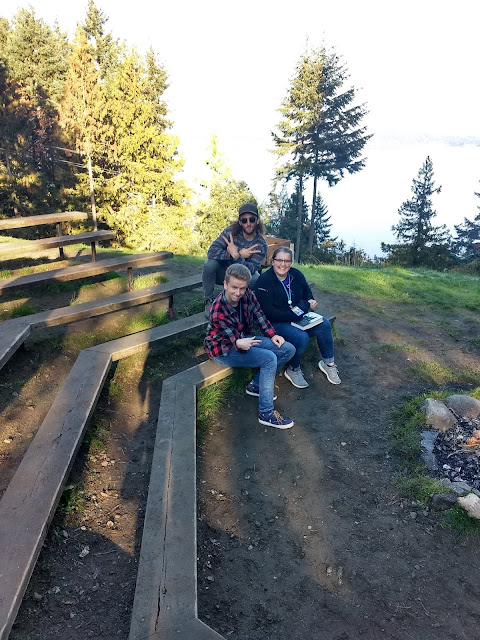 This retreat gave students ample opportunity to put their challenge course skills that they learned in the early weeks of the program to the test. 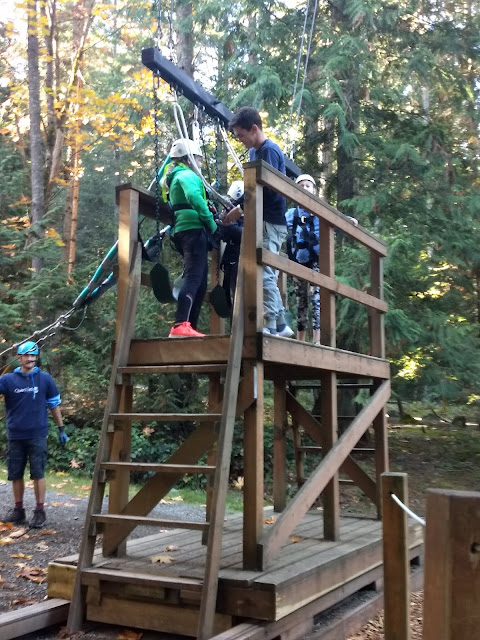 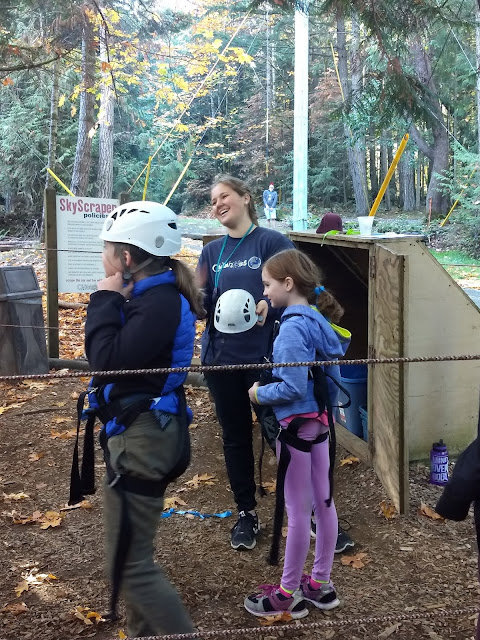 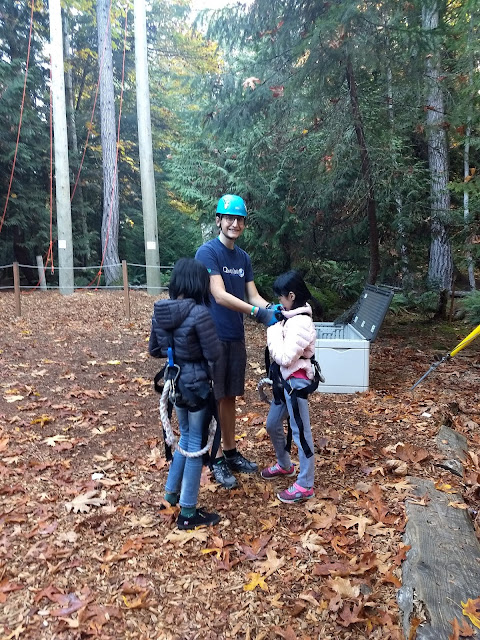 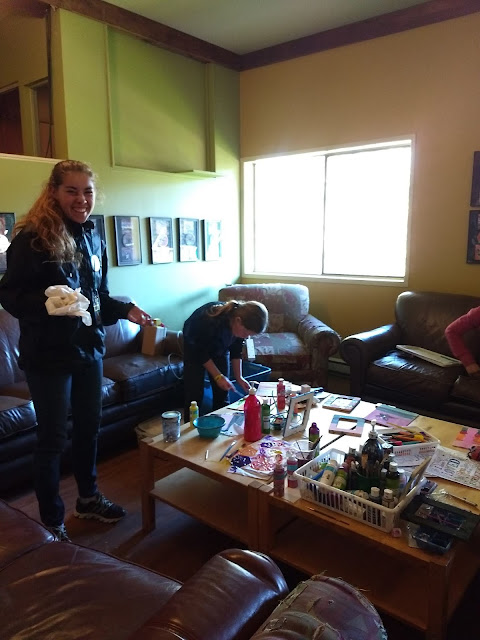 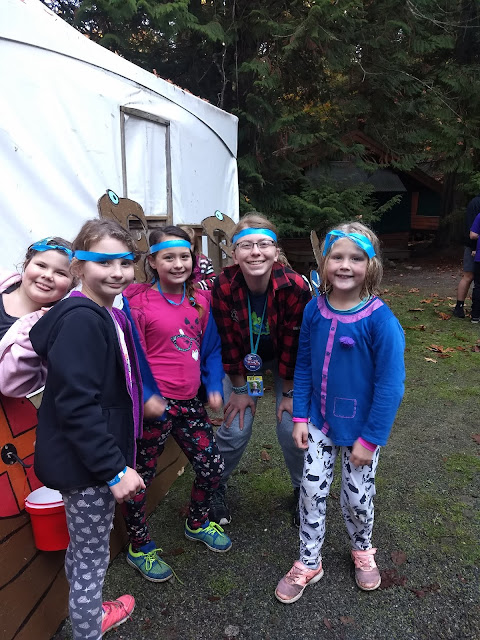 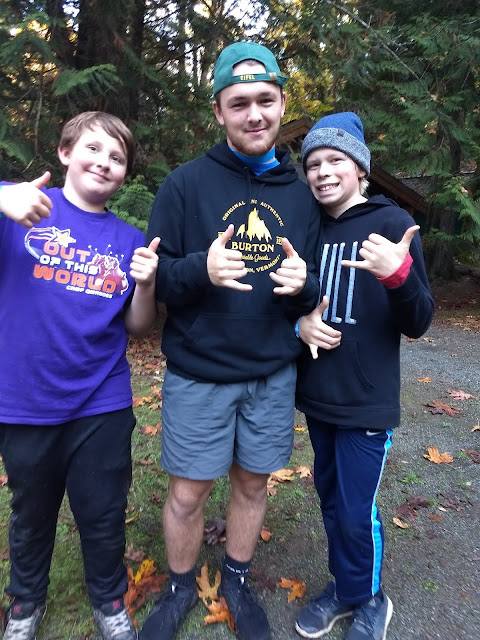 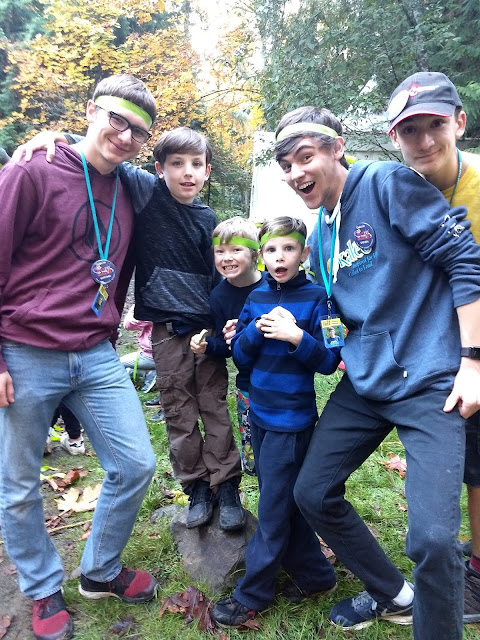 As Camp Qwanoes settles into their fall retreat season we have several more retreats coming up around the corner that the group will have more opportunity to stretch their serving muscles, serving in different capacities than they have previously.
This is beginning to become quite a busy season for students as more classes come, and along with the class comes the homework, as well as continue to serve in retreats, and at their churches. As the students have continued to grow closer together they are loving the experience of living in such a small community together.

That our students will continue to find the balance between when they are serving and managing their school work.

That their academic learning will continue to spark personal curiosity and growth in their lives.

That the community will continue to grow closer together as one unit.
Posted by Kaléo program male intern at 5:21 PM No comments:

We woke up thanksgiving Monday and it was a beautiful day, so we decided to hop in the vans and head off to Gold Stream Tussle. Gold Stream has a waterfall, which was not flowing a lot, but we still were able to enjoy it. Then we took a short hike up a hill to a tussle bridge!


Tuesday morning the bus left for Victoria at 8.00 am where we met the SALTS boat "The Pacific Swift" to go sailing for three nights.

Everyone was split into three different "Watch" groups. These groups would rotate being on watch together which meant that one group was responsible for sailing the ship during the day. At night the students were in pairs and would switch off every hour making sure the boat remained anchored. The groups had a lot of fun learning about sailing together. During the week we took time to share testimonies in the evening and hear each other's stories.


On Wednesday we loaded up the Dory's in the different watch teams and went to an island for a hike and to potentially find some apple orchards. The orchards turned up empty, but we played Huckle Buckle before we left to go back to the Swift.


After dishes were done we would meet up one deck for devotions with everyone.


The different watches took turns running the ship during the day. Some of them took some time to study our geographical location and the course we were taking. When they weren't on watch they could spend some time hanging out, reading for their courses, or climbing the mast.


SALTS owns two boats, the Pacific Swift and the Pacific Grace. The Pacific Grace had a group of students on it from Columbia Bible College who are apart of the Quest program which is very similar to the Kaleo Program.

On Thursday the Swift met up with the Grace and we hung out with Quest on a beach and played some Ultimate Frisbee then spent some time hanging out. It was a great time, I think all the students from both groups enjoyed the time and it was a highlight of the trip for many of them.


It was cool for the groups to have time to fellowship with each other and was a really surreal kingdom illustration for everyone as we gathered to pray over each group.


The weather was beautiful all week! We have been really blessed to have such awesome weather for these out trips lately! The students loved getting to know their watch leaders and getting to connect with the rest of the crew over the course of the week!

HOW TO BE PRAYING:

You can be praying for the students as they begin more class packed weeks. There is a lot of material that they will be going through and a lot more time spent at camp, and less time spent on adventures. As they make this transition into a slower pace of life and the school work building up, be praying that they transition well.

Posted by Female Intern at 3:03 PM No comments:

Email ThisBlogThis!Share to TwitterShare to FacebookShare to Pinterest
Labels: SALTS

We started our journey early Monday morning loading our bags and the food we would need for the next 3 days setting off from the east side of Vancouver Island to our destination on the west, Tofino. 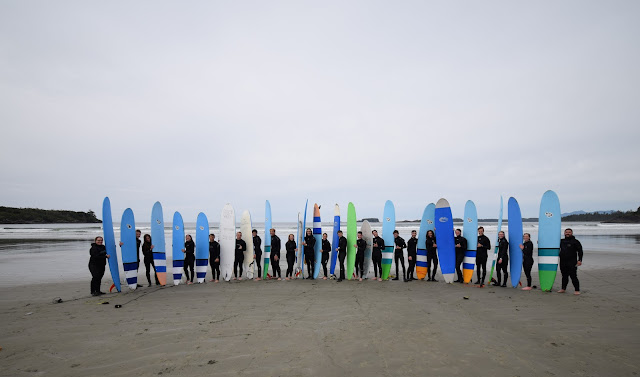 Excited for the waves that we would be riding over the next couple days we sang our way to a pit stop at Cathedral Grove. Cathedral Grove is home to Vancouver Island's largest trees, and they were right on our way, so we had to stop! Taking in the grove of Douglas Fir trees some reaching heights of 240 feet and diameters of 29 feet. 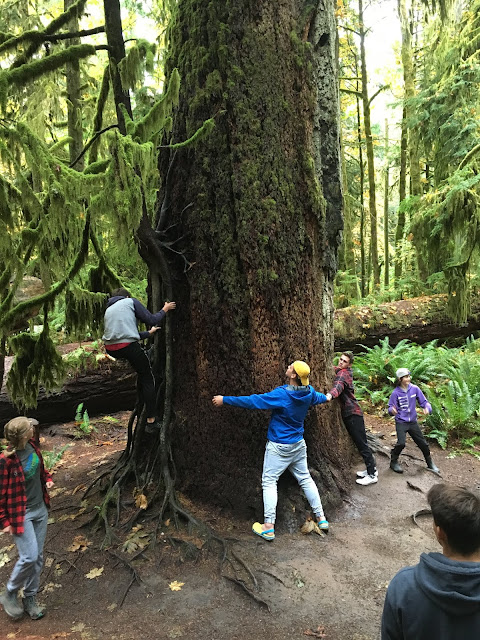 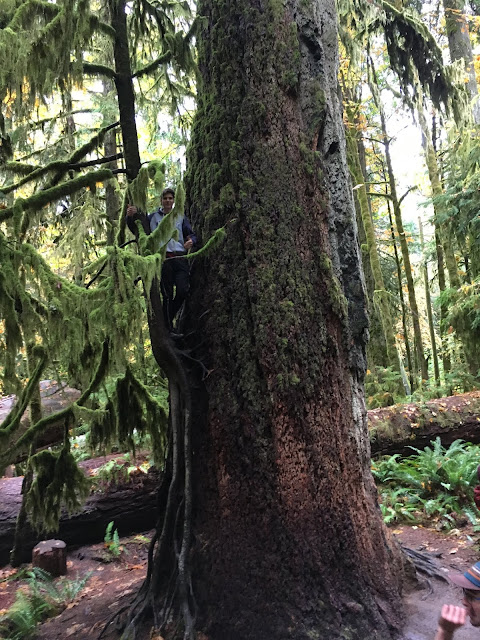 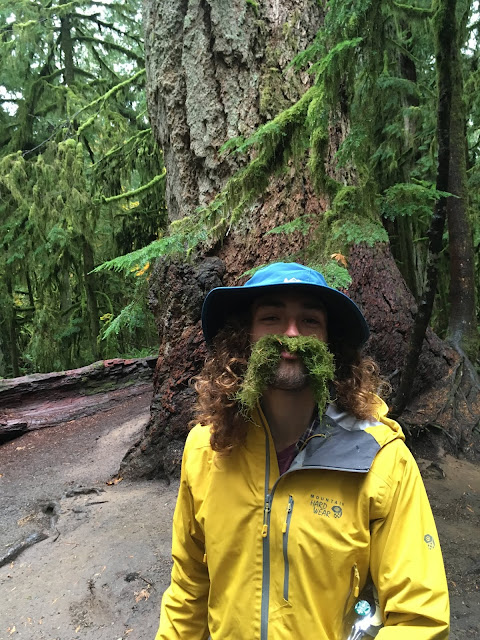 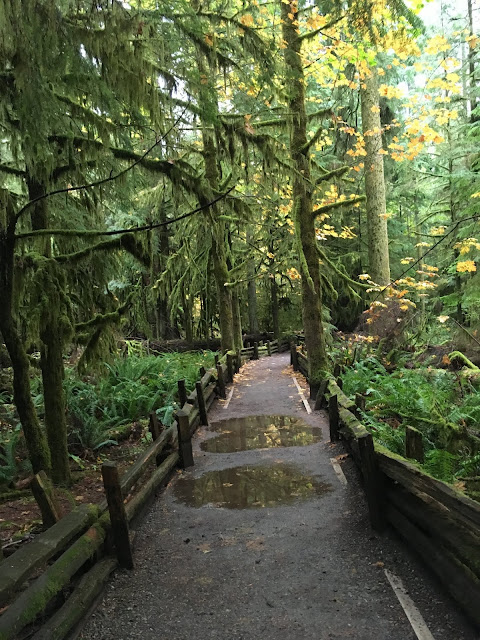 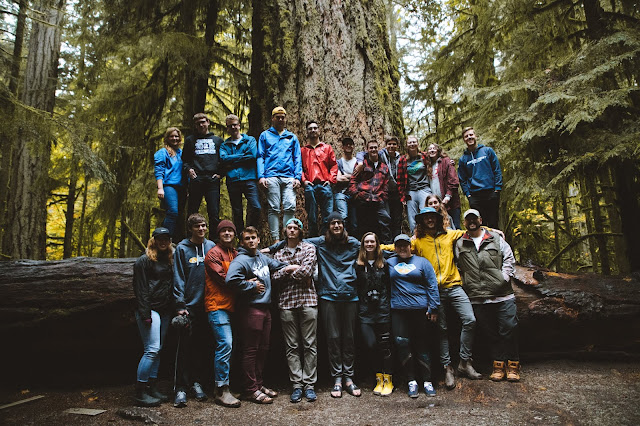 These monsters were mind-blowing for many of our students, we nearly lost sight of what we set out to do in the first place, surf! Although we had one more stop between us and the beaches of Tofino.


Wallies Creek, huge rock formations with rushing water flowing through it, with mountains shooting up to the sky on all sides of us. We took that time to stretch our legs and walk out on the rocks taking a closer look. 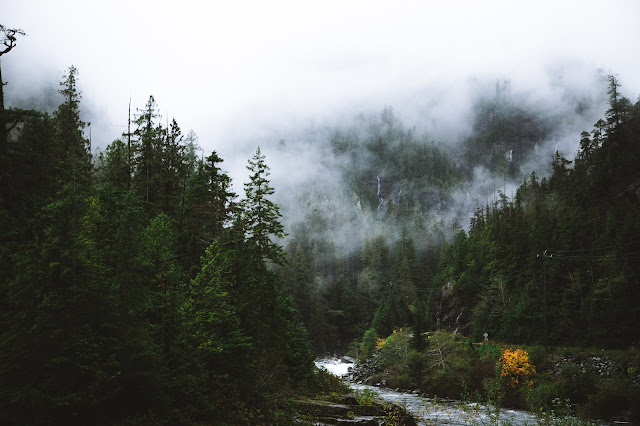 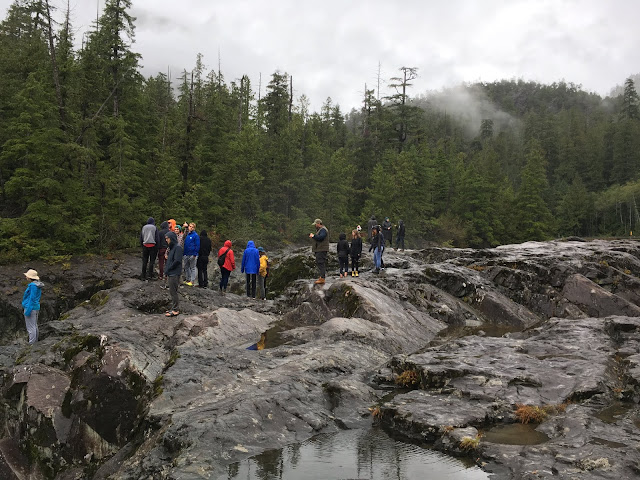 Now we had our sights set on Tofino. We had a final push until we arrived at Long beach where we took some time to admire the ocean we would soon surf. We broke out the skim board, where one of our fearless leaders would effectively show us how to fail miserably getting completely soaked in 2 inches of water. 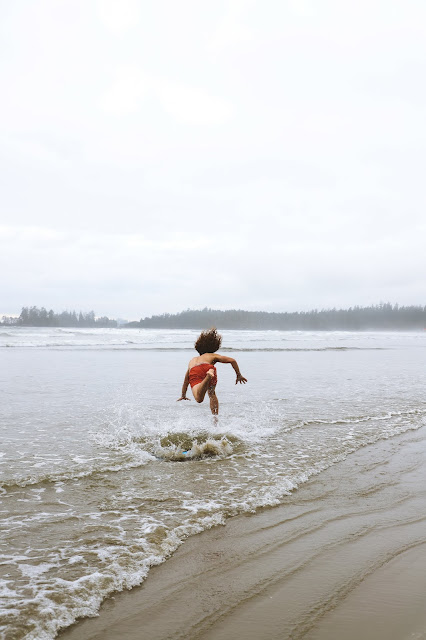 We made our way to the church where we would be sleeping and eating for the next few days where we had a chapel time, played some games, and prepared for the big surf days that were to come. 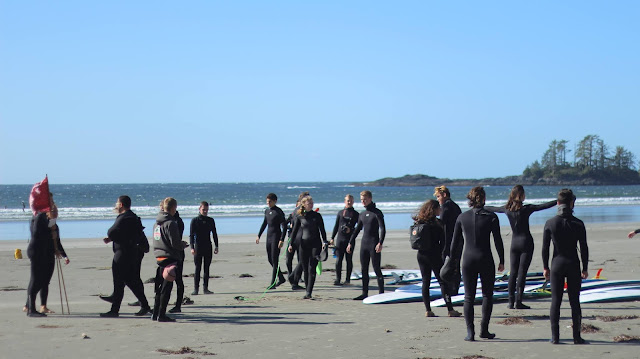 On Tuesday we were ready to hit the waves. We got our wetsuits, boards, met our instructors, and thus, the shredding began. 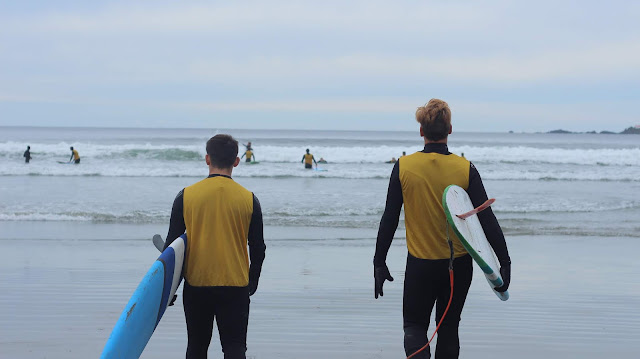 We spent the entirety of the afternoon in the water, where many members of our group who were beginners at the beginning of the day were far from it by the end. We would have stayed all night if we could have, but the hunger that our bellies felt had other plans. We peeled off our wetsuits and headed back to the church for the evening, refilling our bellies and getting some rest for the big day that Wednesday would be. 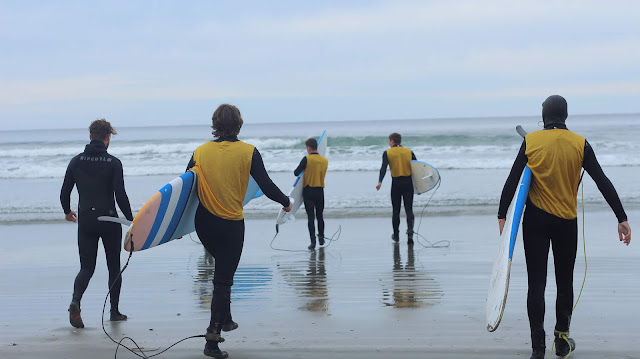 Throwing our cold wetsuits on we hit the water once again. Only this time, the sun was brighter and the waves were bigger. We enjoyed the beautiful day of surfing before we went and enjoyed walking through the town of Tofino with surf shops around every corner we dreamed of working in this small town becoming hippies who could surf every single day.


We were finally able to peel ourselves away from the surf culture with enough time to make it back to Camp Qwanoes before sunset. Although we were able to leave Tofino behind, the surfer lingo that was picked up in 3 short days does not seem to be going anywhere.


For our students as they move into a more class heavy season of the program.

For our students as they begin to serve in the Qwanoes weekend retreats over the next few weeks.

That our students would continue to allow their experiences and things that they are learning penetrate their hearts and spur them on towards growth together as a community, as well as spiritual growth.


Posted by Kaléo program male intern at 7:22 PM No comments: