It's crazy, the first semester is already half over. Time is really flying here at Kaleo and there's been so much happening this last week. Let's take a look back at all we've been doing.

On Tuesday morning we embarked on our third out trip of the year: surfing in Tofino! We had an easy start to the trip leaving Camp Qwanoes around 11am and slowly made our way out west. We stopped at Cathedral Grove and went on a short walk through the forest to look at all of the HUGE trees. Korey also led the students in a short devotional here. Then we stopped in Port Alberni for a bathroom break, to grab coffee and snacks! Finally we made one more short stop for construction before we arrived in Ucluelet where we were staying. Before we arrived at the church (which was our sleeping accommodations for the trip) we made a stop at a very cool light house with a beautiful view of the ocean and Randy led another short devotional. Then we arrived at the church. That evening was spent eating supper, playing lots of games, listening to Korey's chapel, and lots of bonding between the students. It was a great start to the trip and we headed to bed that night with anticipation rising for the activities of the next day!

We got up early Wednesday morning to eat breakfast and pack for the day. Then we headed over to a beach where the students were given time to reflect on the chapel from the night before and enjoy God's creation. After the reflection time we made our way over to the beach where we were going to go surfing! Because the swell was so big we went to Mackenzie beach which is a little bit more protected. Upon arrival we quickly changed into our wet suits and met our instructors for the next two days. After a lesson and a warmup on the beach it was finally time to do it.... we were surfing! For many of the students it was their first time surfing but even still, everyone did great. Almost everyone was able to start catching waves that first day and lots of our students were able to stand up! Our session that day came to an end leaving the students with more anticipation for surfing the next day!

After surfing we headed into Tofino where we had lunch, played some ultimate frisbee, and did some shopping in Tofino. Thankfully we had quite favourable weather the whole trip, especially in comparison to what the forecast was showing (an absolute deluge!!). As evening approached we headed back to the church in Ucluelet where we retired for the night. We had supper, hangout, and watched Surf's Up with ice cream sundaes! Korey's family also joined us on this trip so there was A LOT of time spent hanging out with his daughters. That night we headed to bed looking forward to our final day of the trip.

Thursday morning we got up early, ate breakfast, and cleaned up the church before heading over to the beach. This time we were surfing at Chesterman Beach because the swell size was more favourable for beginner surfers. We quickly changed into our wetsuits, did another warmup with our instructors, and headed into the ocean to shred some waves. The second day of surfing was so much fun. We had a little bit longer to surf and everyone was improving so much! Lots of students caught many waves and it was great bonding for our class to be in the ocean all together having fun! After we finished our surfing session we changed and headed over to Tacofino where we gorged ourselves on massive burritos! It was a great way to wrap up our trip. We made one more stop at a beach as we waited for construction to open up and then we were on our way home. After a quick pitstop in Port Alberni we drove all the way back to camp where we arrived extremely tired but fulfilled by a great trip of surfing, bonding, and beautiful creation!

After the surf trip the students had time off to work on homework, a group project for their upcoming class, Love Crofton prep, and to rest and relax. The next scheduled event was the Harvest Party on Sunday night. 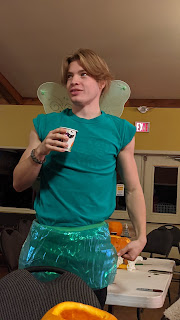 To say that the students dressed up is a huge understatement. We had appearances from Peter Pan, the Beach Boys, a group of hippies, some fairies, and even Hiccup, Astrid, and Toothless from How to Train Your Dragon. The costumes were spectacular but the nights events were even more fun. To start off the night we had a pumpkin carving/come-up-with-a-skit-to-go-with-it contest. There were some great pumpkins that were carved and some great acting that happened and after a final vote a winner was decided. Following that contest eight of the guys who were dressed up as the Beach Boys performed "Surfin' USA" on stage and it was incredible. There was countless hours of practice put into the performance and if you closed your eyes it almost sounded like the real thing! Next we moved into a lip syncing battle where the students battled it out with crazy dance moves, choreography and high energy. We truly witnessed greatness as some of the teams went all out in their performances. Again, the winner was decided by popular vote as we crowned another champion. The final competition of the night was the costume competition where we handed out awards for scariest, best dressed, and best group costumes. The winners truly looked great! The final event of the night was a movie where we watched "Halloween Town" and ate the remainder of the snacks we had. It was a great night and a great way to wrap up October!

This week the students are running the Love Crofton event here in town. They are also continuing to prepare for the Old Testament film for their next class and they are doing other homework as well.

Thanks for reading this weeks blog. Check back in next week for our next update!
Posted by Kaléo program male intern at 3:13 PM