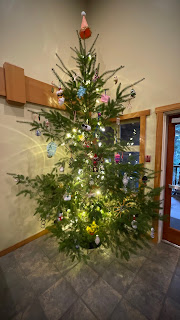 Welcome back to the blog! The last two weeks have been filled with lots of different activities, events and homework. Here's what we've been up to:

Following the class week the students had a few more assignments to complete before they were officially done the class. One of those was their final exam which they wrote on the Monday following their class. The second assignment was their first major research paper of the year. The students had until this last Saturday to finish it up and hand it in. There was definitely some stress around the paper but it was really cool watching their ideas turn into writing and seeing how they learned from this assignment. There was definitely a sense of relief once it was finished.

On the Tuesday following the class week the students had Guys and Girls Day. This day is designed to be a fun bonding experience with fellow students and a nice break from homework.

This year the guys started their day off with a sunrise hike at Stoney Hill (a beautiful lookout over the ocean). Although it was early, the view was immaculate and it was a nice way to ease into the days activities. 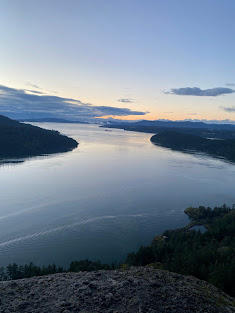 After grabbing breakfast at Tim's on the way back, the guys started a four part challenge that would run throughout the day. There were four teams and each team had a running score so that there would eventually be a grand champion. The first challenge was a minute-to-win-it relay that consisted of a variety of different tasks including some gross eating and blindfolded puzzles. 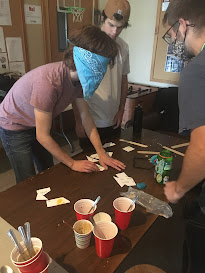 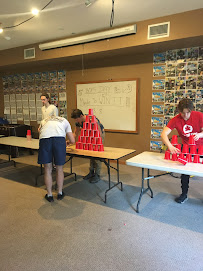 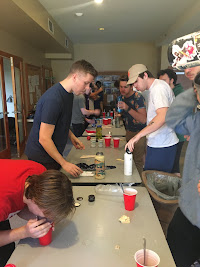 Following the relay was a Kaleo trivia challenge where the students were tested on their knowledge of past, present, and future Kaleo trivia. Although seemingly harmless, the trivia got very intense! Once the trivia challenge was complete we piled into the bus and headed to Victoria where the Flying Squirrel trampoline park awaited us. Upon arrival, they guys spent the next hour flipping, jumping, dunking, and having a ton of fun! It was a great time to challenge one another and experience a lot of joy through exercise. Following the trampoline park, we made a quick stop at Drum-roasters coffee shop, and then headed back to camp. We picked up where we left off with the competition after supper. The next challenge was a lip sync battle where all four teams went head-to-head in a one-round battle. Finally, to finish the challenge off, we had a Spike-Ball tournament. There was some very impressive talent on display and it was a very intense tournament! 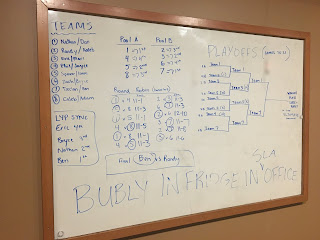 Crazy enough, after everything was said and done, there was tie for first on the overall scoreboard. So naturally we broke the tie with a game of mini-sticks (hockey, but smaller)! We finished off the evening with hot tubbing and a beach fire! All in all it was a great day and the guys had a lot of fun.

The girls similarly started their day off with a sunrise breakfast down at the dock! It was great way to begin the day with fellowship over a meal and instant bonding. 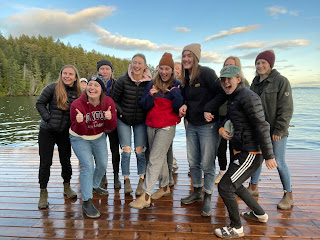 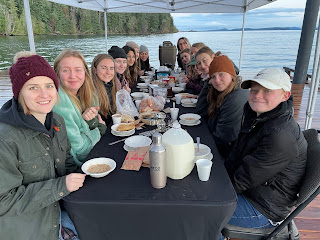 Following breakfast, they had a chance to relax in the hot tub and enjoy a very easy-going morning. Once everyone had the opportunity to soak their bones, the girls headed to town to go thrifting and skating! The thrifting was chaotic, energetic and a lot of fun! Each girl was given an allowance of what they were able to spend and so their decisions on what they would buy were weighed very carefully. After they were done shopping they headed over to the rink to skate. Because it was a weekday, there was basically no one else there! There were crashes, synchronized skating lines, vlogging, and definitely some showing off! This was also a great bonding experience paired with fun exercise! 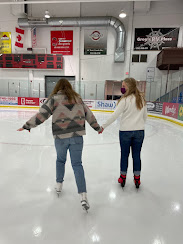 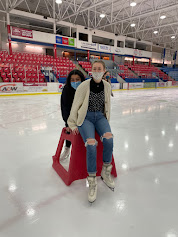 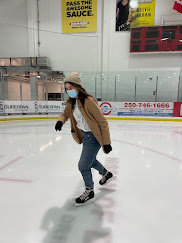 As soon as the girls finished skating there were McDonalds happy meals waiting for them in the parking lot. What better way could you celebrate an awesome skate session than with a burger, chicken strips, fries, and a pop! Then the girls headed back to camp where they had a chance to rest a little before heading over to our camp guest house where 13 beautiful golden retriever puppies were waiting for them! For the next hour they cuddled, played with, fought over, and loved the puppies. This was definitely a highlight for a lot of the girls! 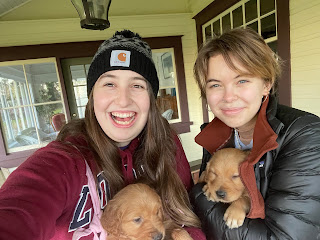 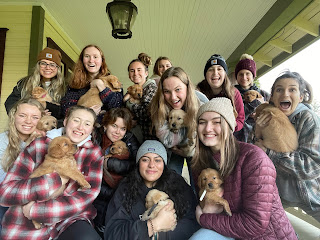 After puppy time, the girls made tacos for supper, played games in the guest house, had a beach fire, and had sharing time. It was a great way to wrap up the day and the girls were able to have fun and encourage each other at the same time.

Also during the week following the Old Testament class was preparation for Christmas. Thursday morning, everyone gathered in Club Coco for decoration making, hot chocolate, and Christmas vibes. There was an incredible amount of talent on display with some students making some very impressive decorations and appearances from a variety of biblical icons! It was a really fun morning spent in community, hanging out by the fire and listening to Christmas music. Because it was raining, we postponed our Christmas tree hunt until the next morning. So Friday we drove to a logging rode, split the students into teams, and the competition to see who could find the best tree began. Alongside the tree was a presentation, and based off both the quality of tree and presentation, a winner was chosen. That afternoon, we set up the tree, hung lights and decorations, and listened to more Christmas music! 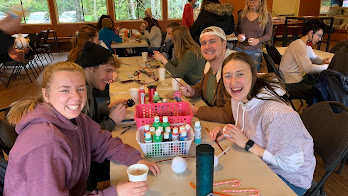 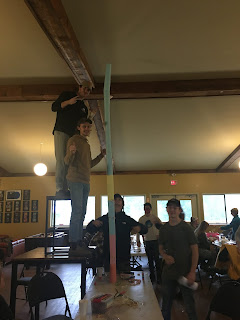 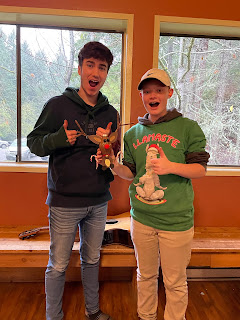 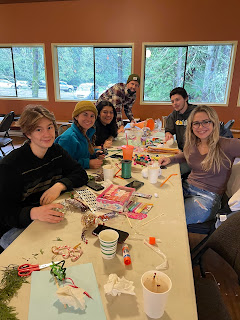 To conclude the Christmas theme of the past two weeks we had a Christmas banquet with staff and students this past Thursday. Everyone dressed up really nice and the dining hall was decorated to fit the season. The kitchen made an amazing dinner with turkey, ham, potatoes and much more! It was a really fun evening eating and sharing stories of our own Christmas traditions. To finish the night there was a ton of photos taken! 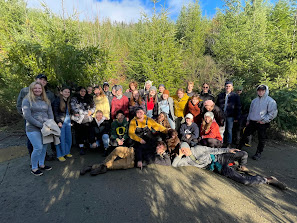 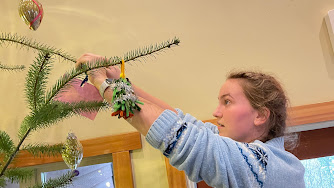 Due to COVID, the only retreat that camp ran this fall was Men's retreat which took place last weekend. Because of one of the courses the students are in, they had to serve at this retreat. Many students were serving in the kitchen, on the dish team, in the challenge course, leading activities, hosting, and more. It was a great opportunity to serve and show God's love to the men staying at camp!

This last Tuesday was our final out trip of the semester. We went for a short hike in the morning to Stocking Creek waterfall after we had grabbed coffee at a local cafe. It was a beautiful river and the waterfall was roaring after all the rain we have been getting. After the hike we drove up to the Romper Room in Nanaimo. Once there, we spent two hours bouldering, climbing and absolutely destroying our muscles and calluses. It was a lot of fun and the students were pushing each other, encouraging each other, and seeing who could climb the hardest routes! To wrap up the day, Randy gave a short devotional in the parking lot and then we headed back to camp. 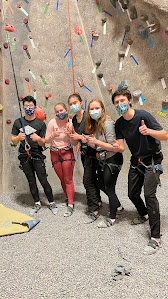 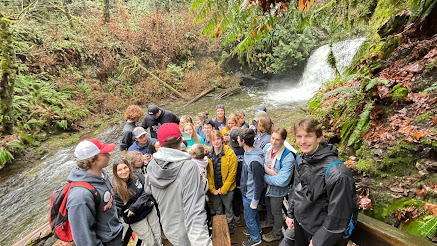 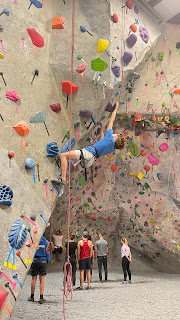 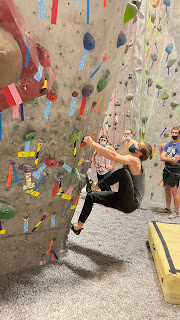 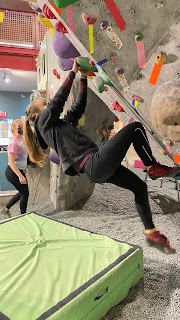 This week the students are taking their Introduction to Christian Theology class with Merrill Dyck. Following that, they will have a few days to finish up homework and then they are heading home for Christmas break.

Thanks for reading the latest update. Keep checking back in for more information about the Kaleo program!
Posted by Kaléo program male intern at 3:13 PM